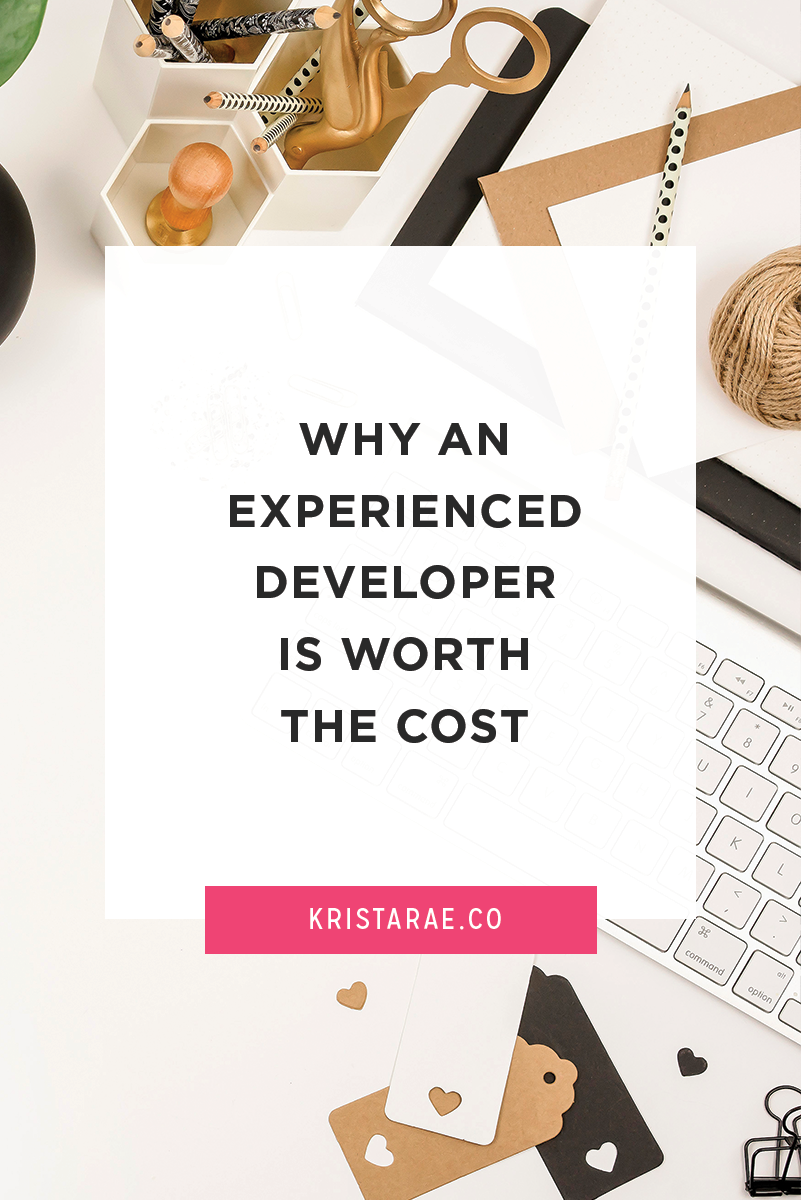 A common concern I hear from designers who want to start working with a developer is the cost of custom development. And with prices ranging anywhere from $100 to $10,000, I get it.

With those higher prices, it’s tempting to try someone out on the lower end of the spectrum. After all, why pay $3k for development when you can pay $300?

It turns out, this is one of those areas where you truly get what you pay for and going the cheaper route isn’t worth it. In many instances, you’re better off skipping custom development altogether or going through the work of learning yourself.

But assuming you’ve decided that custom development is something you want to look into and hundreds of hours to learn to code doesn’t fit in your schedule, today we’ll go over a few reasons that an experienced developer is truly worth the cost.

The first aspect of a project we’ll look at is the overall client experience. And since you, as the designer, are technically the developer’s client, this is two-fold. We’re looking both at the experience that you’re given as well as the experience given to your client.

A common issue you’ll run into with inexperienced developers are problems with the project timeline. As we’ve all seen, when booking a project it’s easy to get excited and agree to a timeline that our clients ask for. But when you’re working with someone who isn’t totally sure of what they’re doing, they’re likely to make promises they can’t keep.

I’m speaking out of experience here. The first custom development project I got was developing 6 themes for a theme shop for $150 each. While I cringe thinking about it now, I was excited at the time because it was the first chance I was getting to really do what I wanted to do. The designer I was working with wanted two themes per week. I wasn’t sure I could do it, but I figured I’d make it happen and that I wouldn’t be asked to do anything that wasn’t possible.

How do you think that went?

Yeeeaahh, it didn’t really go at all. A project that was supposed to take 3 weeks, turned into over 6. Double the original timeline.

A developer with more experience than I had at the time would have been able to look at the timeline being requested and pointed out that it wasn’t feasible to turn out one theme every couple days with very good results.

Now put yourself in a similar situation with a client project. Your developer agrees to a timeline, you and your client deliver what’s needed on time, but then the developer falls weeks behind what you’ve agreed. Not only are you frustrated for yourself, but you’ve then got an angry client to deal with. Heck, they might even get upset enough to start demanding refunds, in which case it would have saved you money if you would have gone with a more expensive developer in the first place.

The ability to provide clients with what they need

Something I’ve learned through my years of developing websites is that clients need training, whether they’re tech savvy or not. It’s not fair to create a custom site for them and then expect them to figure out the maintenance aspect on their own.

That’s why one of the most important parts of my process comes right at the end: putting together documentation and creating personalized training videos.

This is huge in making your clients feel empowered to update their websites, which leaves them happier overall.

Developers who are just getting started at a super low price point aren’t expecting to have to go above-and-beyond in that way. And heck, for the low price-points, can you blame them? They’re expecting to fight through the work they were hired to do and be done.

A solid and smooth system

One of the things I’ve become most proud of in my client process is the system I have in place. From the time a designer inquires to the time a project is finished, they’ve experienced a smooth process without ever having to question what kind of progress is being made or what is coming next.

However, that wasn’t always the case. It used to be a bumpy ride with questions popping up throughout the project, last-minute issues being discovered, and realizing far too late that I didn’t have everything I needed.

Paying the higher price point for someone who has perfected their process will make the project a whole lot more stress-free on your end.

And the last thing we’ll touch on with client experience is the reliability of the developer you choose.

We’ve aaaall heard horror stories of developers disappearing part way through a project, taking the deposit they’ve received and leaving the designer and client to find someone else to finish what they started.

If you think about it, people who are successfully charging more premium prices didn’t get there overnight. Through successfully completing projects and making clients happy, they’ve been able to charge what they’re worth.

Developers tend to run off in the middle of a project when it’s more than what they bargained for or when they realize they can’t quite do what they promised. The lower price point some charge can be a big indicator as to how confident they are in their work, which should lead to some red flags on your end when looking for someone to work with.

The second aspect of this is the final website you’re presented with once the project is complete. When you work with a developer who knows what they’re doing, you can expect the website to look just like your mockups and for things to function smoothly. But is that always the case?

Here are some issues that commonly come up in the final website when working with inexperienced developers:

When working with an experienced developer, you can expect the final website to be a spitting image of your mockups. If you design a blue button that is 50 pixels below the text above it with white, size 12px, bold font with 1px of letter spacing, that’s exactly the way it should show up on the final website.

But inexperienced developers don’t quite have the know-how to make that happen. Instead, they do their best to eyeball things and make excuses as to why they can’t do things just like your mockup when it is indeed possible. (And hey, I’m speaking from being that developer when I first got started)

One of the benefits of working with a developer is that you can add features to a website that you wouldn’t be able to on your own. So being told that something isn’t possible would probably come as a surprise to you.

Now with this one, I’m not saying that a developer who lacks experience would flat out lie to get out of a feature they weren’t familiar with, but they may not have the knowledge required to know how much can actually be accomplished through custom coding.

So if you have more complex features or even just special transition effects, going with a developer who has proven experience will almost always be worth the added cost.

Writing good code is truly a science. There’s a lot that goes into it and it takes years of training to know how to do things properly.

And there’s good reason for it. The way code is written has a huge part to play in how quickly a website loads, how reliable it is, the appearance of bugs, and the ease of updates for developers in the future.

When paying for custom development, you and your client both expect things to be done right. Otherwise, you’d probably just whip something together yourself, right?

I’ve seen situations where a less experienced developer has been chosen and a month after the launch the entire theme is corrupted and unable to be restored. At that point, starting from scratch is the only real option.

Ease of updates for your clients

And the last thing we’ll talk about is how easy the final website is for your clients to update.

A client shouldn’t have to make their way through code or a pile of widget areas to be able to update a piece of text on their homepage. It should be *easy*.

But developers who are just getting started don’t know all the tools out there to make those easy updates happen. For example, my first clients need to avoid messing with HTML and CSS in their page templates when making simple updates. But since then, the clients I’ve worked with have been able to enjoy the ease of use that comes from tools like the WordPress Customizer, the Advanced Custom Fields plugin, or even drag-and-drop page-builders were appropriate.

Is an experienced developer worth it to you?

Paying someone to do their job well is worth it when it means less rework and stress for both you and your client. It’s exactly the same as comparing a designer who charges $500 to one who charges $5000. You can expect very different results, right?

If you’re not yet to a place where you can afford a developer who is even charging $1500 for a custom website, don’t worry. Check out this post on how to incorporate a developer’s pricing into your design packages and take it from there.

To learn more about working with a developer, unlock the ultimate checklist to go from hours of code to development-free design projects. Click the button below to get started! 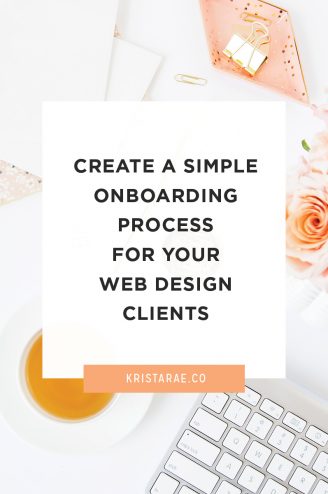 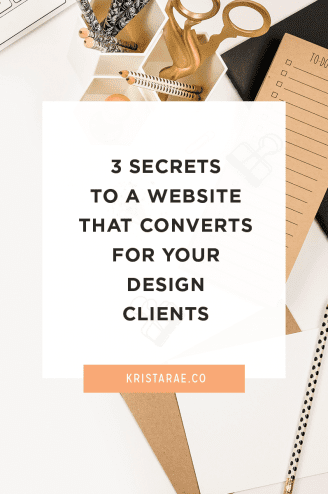 3 Secrets To A Website That Converts For Your Design Clients 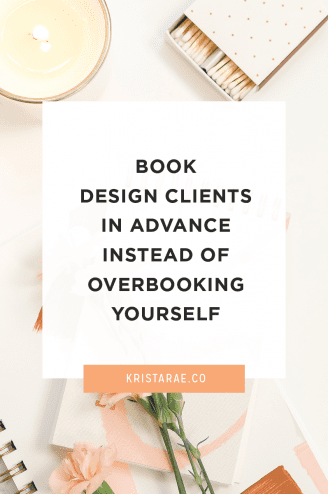 Book Design Clients In Advance Instead Of Overbooking Yourself 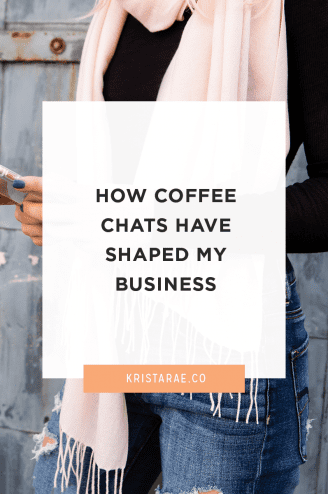 How Coffee Chats Have Shaped My Business